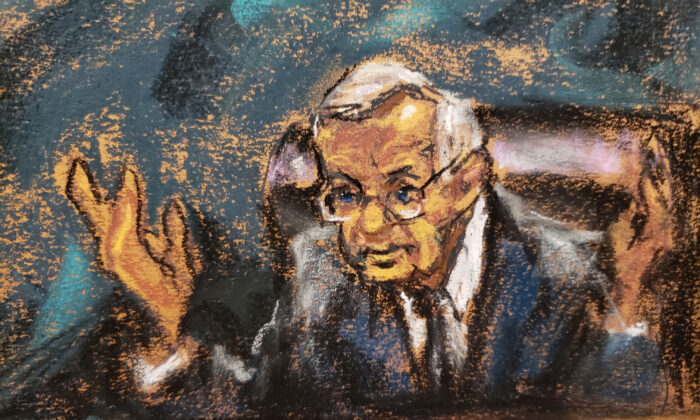 U.S. District Judge Raymond Dearie presides over his first public hearing since his appointment as special master to review documents seized last month by the FBI from former President Donald Trump’s Florida home, at a courtroom in New York on Sept. 20, 2022. (Jane Rosenberg/Reuters)
By Zachary Stieber

The judge designated as the special master in former President Donald Trump’s records case has proposed that a government official swear that the government properly listed items taken from Trump’s home in August.

U.S. District Judge Raymond Dearie, the special master, also left open the possibility of recommending the government be ordered to return some of the seized materials.

Dearie outlined the plan on Sept. 22, following an order that blocks him and Trump’s lawyers from accessing materials with classified markings that were taken from Trump’s home in Palm Beach, Florida.

Dearie, a George W. Bush appointee, was chosen by Trump attorneys and Department of Justice (DOJ) lawyers and put into place by U.S. District Judge Aileen Cannon, a Trump appointee. Trump and the DOJ can object to components of the plan; Cannon would adjudicate any objections.

Dearie’s case management plan starts with having a government official “with sufficient knowledge of the matter” submitting a declaration or affidavit regarding an inventory list DOJ officials have released.

The official would attest that the list “represents the full and accurate extent of the property seized from” from Mar-a-Lago, Trump’s Florida residence.

If the plan is put into place, Trump would then respond with a list of any items listed by the government that were not seized from Mar-a-Lago.

Trump would also detail items that were seized but not included in the inventory.

“This submission shall be Plaintiff’s final opportunity to raise any factual dispute as to the completeness and accuracy of the Detailed Property Inventory,” Dearie said.

The government would then be allowed to respond to Trump.

Based on an appeals court order, Cannon earlier Tuesday blocked Dearie and Trump lawyers from viewing the roughly 100 materials that were marked classified and seized from Mar-a-Lago.

Dearie and the Trump attorneys are still poised to review each page of non-classified materials taken from the resort.

The final log of privilege designations is due to Dearie on or before Oct. 21.

The special master will not decide whether Trump shall receive any of the seized materials back until after Cannon rules on any objections to his plan.

Trump has already motioned for the return of property.

Trump must submit a brief in support of the motion no less than seven days after Cannon finishes ruling on the case management plan and any objections. The government will then respond, and Trump can respond to the government’s response.

Either party can request an oral argument.

Dearie said that he will “promptly issue a report and recommendation after briefing and oral argument has been completed.” Cannon has the final say on the motion.

Dearie wants permission to bring on a retired judge for assistance.

Former U.S. Magistrate Judge James Orenstein “has experience with complex case management, privilege review, warrant procedures, and other matters that may arise in the course of the Special Master’s duties,” Dearie wrote.

Magistrate judges are appointed by other judges.

Orenstein has worked with the Foreign Intelligence Surveillance Court—Dearie served on that court for years—and holds top secret clearance.

Orenstein should be compensated at $500 an hour, Dearie said.

Trump is paying for all of the costs associated with the special master’s work.