Trump Sues New York AG For Trying To ‘Destroy’ Him 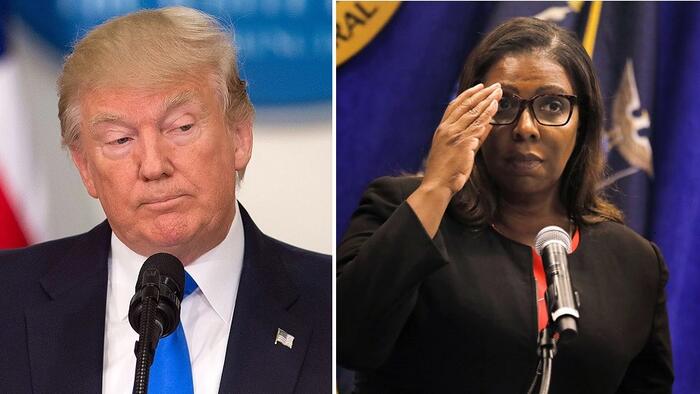 Former President Donald Trump has sued New York Attorney General Letitia James, accusing her of a campaign of “intimidation and harassment” in which she abused her position of power in “attempts to steal, destroy or control things Trump.”

In a 41-page civil lawsuit filed in Florida, Trump seeks to shield his revocable trust from James – who filed a $250 million civil suit against the former president and his family. The trust contains Trump’s revocable trust and private estate plan, and details how his estate will be divided upon his death.

Trump’s lawyers say the trust must be protected against James, who they have accused of invading his privacy.

“What began as a cartoonish, thinly-veiled effort to publicly malign President Trump for personal gain has morphed into a plot to obtain control of a global private enterprise ultimately owned by a Florida revocable trust in which President Trump is the settlor,” Trump’s legal team wrote in the Wednesday night filing, the Washington Times reports.

Mr. Trump’s lawyers argue that under Florida law, revealing a settlor’s revocable trust while they are still alive violates a right to privacy guaranteed under the state constitution.

A spokeswoman for Ms. James issued a statement Wednesday night noting that Mr. Trump has twice sought to end the investigation and both were rejected by judges.

“We sued Donald Trump because he committed extensive financial fraud. That fact hasn’t changed, and neither will our resolve to ensure that no matter how powerful or political one might be, no one is above the law,” the statement said. -Washington Times

James filed the September lawsuit against Trump, alleging that he and his family enriched themselves through “numerous acts of fraud and misrepresentations” over the course of two decades, during which she says Trump “grossly” inflated his net worth by billions of dollars, while making false and misleading financial statements.

She also alleges that Trump has been moving assets around and restructuring his business to “evade liability” – which requires her to crack into his revocable trust.

On Wednesday, Trump wrote: “While James does nothing to protect New York against these violent crimes and criminals, she attacks great and upstanding businesses… which have done nothing wrong, like the very successful, job and tax producing Trump Organization that I have painstakingly built over a long period of years.”