Tucker Carlson on how ‘permanent’ Deep State is targeting Biden, but he still deserves no sympathy 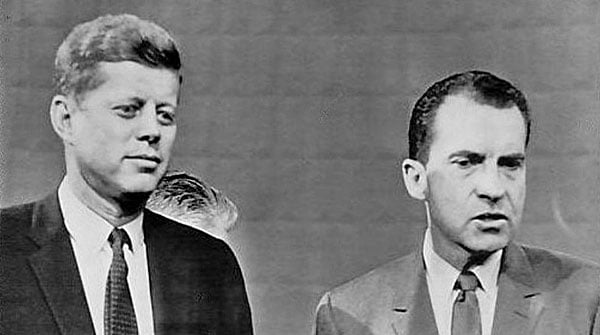 Fox News commentator Tucker Carlson has unleashed a monologue explaining how it is, in fact, “permanent” Washington that now is shafting Joe Biden.

But he also explains Biden deserves no sympathy.

According to a transcript assembled by the Liberty Daily, Carlson points out that the similarities between Biden’s catastrophe and Watergate is similar “by design.”

WND is now on Trump’s Truth Social! Follow us @WNDNews

Is the Deep State deeper than we think?

So we went for the most popular president to a president nobody voted for. Wait a minute, you may ask, why didn’t I know that? Wasn’t Richard Nixon a criminal? Wasn’t he despised by all decent people? No, he wasn’t. In fact, if any president could claim to be the people’s choice, it was Richard Nixon. Richard Nixon was reelected in 1972 by the largest margin of the popular vote ever recorded before or since.

Nixon got 17 million more votes than his opponent. Less than two years later, he was gone. He was forced to resign and in his place, an obedient servant of the federal agencies called Gerald Ford took over the White House. How did that happen? Well it’s a long story but here are the highlights, and they tell you a lot.

Richard Nixon believed that elements in the federal bureaucracy were working to undermine the American system of government, and had been doing that for a long time. He often said that. He was absolutely right. On June 23rd, 1972, Nixon met with the then-CIA director Richard Helms at the White House. During the conversation, which thankfully was tape recorded, Nixon suggested he knew “who shot John,” meaning President John F. Kennedy.

Nixon further implied that the CIA was directly involved in Kennedy’s assassination, which we now know it was. Helms’s telling response: total silence. But for Nixon, it didn’t matter because it was already over. Four days before on June 19th, the Washington Post had published the first of many stories about a break-in at the Watergate office building. Unbeknownst to Nixon and unreported by the Washington Post, four of the five burglars worked for the CIA.

The first of many dishonest Watergate stories was written by a 29-year-old metro reporter called Bob Woodward. Who exactly was Bob Woodward? Well, he wasn’t a journalist. Bob Woodward had no background whatsoever in the news business. Instead, Bob Woodward came directly from the classified areas of the federal government.

Shortly before Watergate, Woodward was a naval officer at the Pentagon. He had a top secret clearance. He worked regularly with the Intel agencies. At times, Woodward was even detailed to the Nixon White House where he interacted with Richard Nixon’s top aides. Soon after leaving the Navy, for reasons that have never been clear, Woodward was hired by the most powerful news outlet in Washington and assigned the biggest story in the country.

And just to make it crystal clear what was actually happening, Woodward’s main source for his Watergate series was the deputy director of the F B I. Mark Felt, and Mark Felt ran — and we’re not making this up — the FBI’s COINTELPRO program, which was designed to secretly discredit political actors, the federal agencies wanted to destroy, people like Richard Nixon.

And at the same time, those same agencies were also working to take down Nixon’s elected Vice President, Spiro Agnew. In the fall of 1973, Agnew was indicted for tax evasion and forced to resign. His replacement was a colorless Congressman from Grand Rapids called Gerald Ford. What was Ford’s qualification for the job?

Well, he had served on the Warren Commission, which absolved the CIA of responsibility for President Kennedy’s murder. Nixon was strong armed into accepting Gerald Ford by Democrats in Congress. “We gave Nixon no choice but Ford,” Speaker of the House Carl Albert later boasted. Eight months later, Gerald Ford of the Warren Commission was the President of the United States.

See how that works? So those are the facts, not speculation. All of that actually happened. None of it’s secret. Most of it actually is on Wikipedia, but no mainstream news organization has ever told that story. It’s so obvious, yet it’s intentionally ignored. And as a result, permanent Washington remains in charge of our political system.

Unelected lifers and the federal agencies make the biggest decisions in American government and crush anyone who tries to rein them in. And in the process, our democracy becomes a joke. Now, you may have noticed that the very first person in the Trump administration, the agencies went after was General Michael Flynn.

Why Flynn? Because Mike Flynn was a career army intel officer who ran the Defense Intelligence Agency. In other words, Mike Flynn knew exactly how the system worked, and as a result, he was capable of fighting back. Four days after Donald Trump’s inauguration, the FBI lured Mike Flynn into a meeting without his lawyer, concocted a series of fake crimes and forced him to resign.

So that’s how things actually work in Washington. Let’s stop lying about it. Joe Biden, meanwhile, whooped like a hyena when the Justice Department destroyed Mike. So there is, we have to say a certain perverse justice in watching something very similar happened to Joe Biden himself six years later. Joe Biden does not deserve our sympathy.

He’s being shafted, but don’t weep for him. And yet the rest of us do deserve a better system, an actual democracy. When people nobody voted for run everything you are not living in a democracy.

The Gateway Pundit noted, “Tucker Carlson dropped the hammer on the ‘permanent Deep State’ yesterday, charging that the CIA was actually behind Richard Nixon’s ouster over Watergate by a former intel operative named Bob Woodward who ‘came directly from the classified areas of the federal government.'”