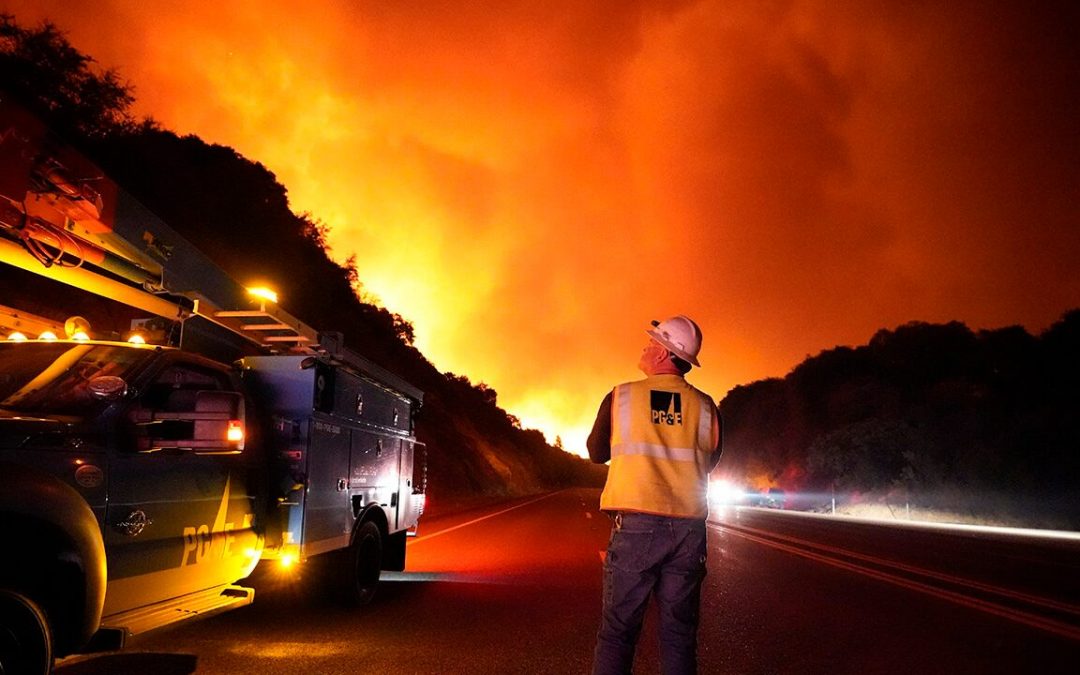 Tumultuous weather is expected across the country this week, with historic wildfires burning in the West, a tropical storm heading toward the Gulf Coast by mid-week and an early-season winter storm expected to bring snow and ice from the Rockies into the Plains.

California, which has endured its worst wildfire season in history, is bracing for the most dangerous winds of the year, a forecast that prompted the largest utility to announce plans to cut power Sunday to nearly 1 million people to guard against its equipment sparking new blazes.

Pacific Gas & Electric Co. said the outages would start Northern California and ultimately could affect 386,000 customers in 38 counties, with many of the shutoffs concentrated in the San Francisco Bay Area. High winds were expected to reach 40 to 60 mph by Sunday with higher gusts in the mountains.

In Colorado, snowfall helped slow the rapid spread of two of the largest wildfires in state history — the Cameron Peak Fire and East Troublesome Fire. The winter weather comes after extreme winds and low humidity Saturday had intensified the East Troublesome Fire, as firefighters were in defensive mode near the border of Rocky Mountain National Park and Estes Park, park officials said Sunday.

In this Tuesday, Sept. 8, 2020 file photo, A Pacific Gas and Electric worker looks up at the advancing Creek Fire along Highway 168 near Alder Springs, Calif. Pacific Gas &amp; Electric will cut power to over 1 million people on Sunday to prevent the chance of sparking wildfires as extreme fire weather returns to the region, the utility announced Friday. Oct. 23, 2020. (AP Photo/Marcio Jose Sanchez, File)

The National Weather Service issued winter storm warnings, watches and advisories from the central and south Rocky Mountains into the Plains and even down toward West Texas and Oklahoma.

Meanwhile, Tropical Storm Zeta is gathering strength in the Gulf of Mexico and may reach Category 1 status by Monday before coming ashore somewhere between Florida’s western panhandle and Louisiana by mid-week, according to the National Weather Service.

It’s the 27th storm of the 2020 Atlantic hurricane season – that’s the same amount as in 2005, which set a new record for the most in one season, the Palm Beach Post reported.