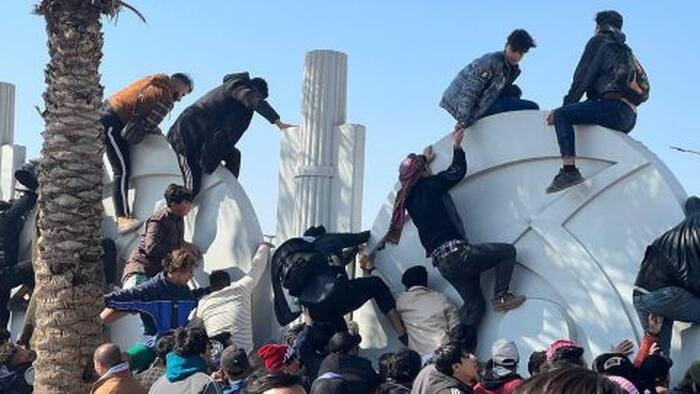 Two people have been killed and at least 60 injured after huge crowds descended all at once on the large sporting complex Basra International Stadium in the port city of the same name in southern Iraq, resulting in a massive stampede.

Fans were there to see the Gulf Cup final – a much anticipated event given it was the first time since 1979 that Iraq has hosted the major regional soccer tournament. Chaos ensued after security closed the gates to the stadium as it had reached capacity and the area was subject to extreme overcrowding. Footage showed the stopped crowds outside the stadium just before the surge and deadly stampede…

It happened hours before the start of the Gulf Cup final, with officials urging the throngs to disperse given the increasingly dangerous situation. “A large number of fans, many of them without tickets, had gathered since first light to try to get in,” an Iraqi Interior Ministry official said.

The death toll could rise, given the severity of injuries, as Al Jazeera reports: “The official Iraqi News Agency (INA) has quoted a medical source as saying some of those injured in the stampede were in critical condition.”

“INA put the number at 60. The Iraqi Football Association told Al Jazeera 20 people suffered suffocation and another 80 were injured.”

Harrowing footage of the stampede aftermath showed people lying flat on the ground screaming for help, and with others unconscious or possibly deceased.

At least one person was killed and some 60 people were injured in a stampede outside the Basra International Stadium in Iraq, hours before the Gulf Cup final football match pic.twitter.com/0mXLfYJ6H4

Later, even after the disaster and with emergency vehicles on the scene and security forces trying to clear the area, crowds of people could still be seen trying to access the sports complex by climbing gates and large fences.

According to Al Jazeera, the match proceeded. “Basra’s governor confirmed that the match will be held in the city and not be transferred to another country as had been speculated,” the report indicated.

Two people have reportedly died and many others have been left injured after a stampede outside the Basra International Stadium ahead of the Gulf Cup Final between Iraq and Oman.

It was the first major game in the country in four decades. pic.twitter.com/Jps8iyNxzY

The Gulf Cup began on January 6, and includes teams from Iraq, Kuwait, Bahrain, Oman, Qatar, Saudi Arabia, the United Arab Emirates and Yemen. Iraq had long been banned by FIFA and other major soccer organizations during the Saddam Hussein era, especially after the 1990 invasion of Kuwait.