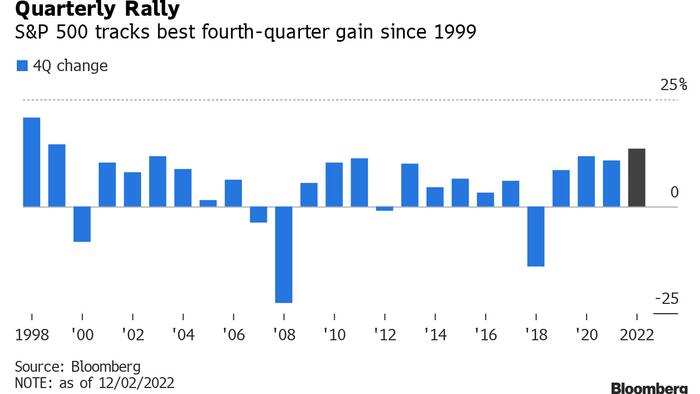 US stocks have had a stunning quarter so far, the best Q4 since 1999! To expect them to continue rallying would to be wish for the Hailey’s Comet to keep appearing in quick succession.

The markets have been front-running the idea of a Fed pivot for some time now. While that is far-fetched, one must still admit that a Fed pause after its funds rate reaches circa 5%-5.25% is very much on the cards. While pretty much everyone in the markets is primed for the idea of a US recession, November’s non-farm payroll numbers (and perhaps even more importantly, the hourly earnings rising at twice the forecast pace) suggest that this inflationary episode may be around longer than realized.

And that is a worse denouement than any stock investor would wish. Not only do you have a scenario where inflation is corroding the nominal coupon on stocks, but you also have to factor in a slowing economy where presumably there is also a drag on earnings. A scenario that weighs on both the numerator and denominator (a high interest-rate recession) is hardly a prescription for a stellar rally month after month.

At current levels, the S&P 500 offers an estimated earnings yield of around 5.40% and the Nasdaq 100 around 4.32%, hardly anything to write home about in an environment where you can invest in two-year Treasuries that offer 4.27%.

Yes, there may be something to be said for being a part of that smart-money brigade that has made a grand return of 20%+ within a quarter and fleeing to where the honey is next, but that is predicated more on getting the timing right — an iffy proposition even with the most seasoned investors. For every one idea that works out as per plan, the nine that follow come a cropper.

As Benjamin Graham said, investment is most intelligent when it is most business-like, not when you treat the stock market as a casino, looking for the next big lottery that will offer massive returns overnight.