U.S. cancels charter flights to Cuba with exception of Havana

The U.S. is sharply reducing flights allowed to Cuba in an effort to reduce revenue to the communist government. On Friday, Secretary of State Mike Pompeo announced a cancellation of all charter flights to Cuba with the exception of capital city Havana. This comes after the U.S. terminated commercial flights to Cuba late last year.

Pompeo said the action prevents the Castro regime from using the profits to repress Cuban people. The secretary continued his stance that the Cuban government is oppressing its citizens as he said when commercial flights were cancelled.

“Sadly, Cuba’s most prominent export these days is not cigars or rum, it’s oppression,” he stated. “Day talk with the regime has failed…cozying up to Cuban dictators will always be a black mark on this great nation’s long record, of defending human rights.”

According to the State Department, nine airports in Cuba will be affected and charter companies will have 60 days to discontinue all flights. 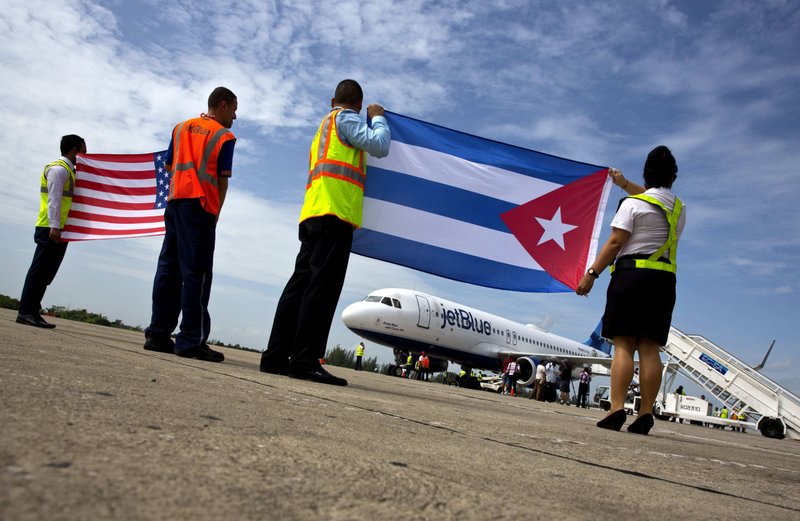 FILE – In this Aug. 31, 2016 file photo, airport workers receive JetBlue flight 387, the first commercial flight between the U.S. and Cuba in more than a half century, holding a United States, and a Cuban national flag, on the airport tarmac in Santa Clara, Cuba. The Trump administration is banning U.S. flights to all Cuban cities except Havana. (AP Photo/Ramon Espinosa, File)

Cuban Foreign Minister Bruno Rodriguez called the move a “violation of human rights,”adding that it would hinder family reunification.

I strongly reject new #US government ban on charter flights to #Cuba, except for Havana, and restrictions on their number. This is serious violation of human rights and freedom of travel of US citizens and hinders family reunification. #CubaVsBlockade

President Trump has expressed his intent to weaken the power of Venezuela’s embattled President Nicolas Maduro, who is backed by Cuba.

“The Trump administration is committed to helping grow the wave of democracy, good governments and openness, which is steadily building throughout the entire western hemisphere,” he stated.

Pompeo said the Department of Transportation is expected to set an appropriate cap of flights allowed to enter Havana and will release more details in the near future.