Authored by Mike Shedlock via MishTalk,

UK Labour party Shadow Chancellor, John McDonnell, wants to slash the work week and pay by 75% to save the planet.

A number of sources confirm this Onion-like story.

Metro: Plan for 10-hour working week with 75% paycut under Labour

Those are Tabloids, but even Bloomberg is in on the act with a less controversial but similar idea: Jeremy Corbyn’s Four-Day Week Is Not Such a Bad Idea.

Shadow Chancellor John McDonnell, who has previously backed a four-day working week, said: ‘This is a vital contribution to the growing debate around free time and reducing the working week.’

Leo Murray, adviser to Shadow Treasury minister Clive Lewis, said: ‘I like this take a lot.’ 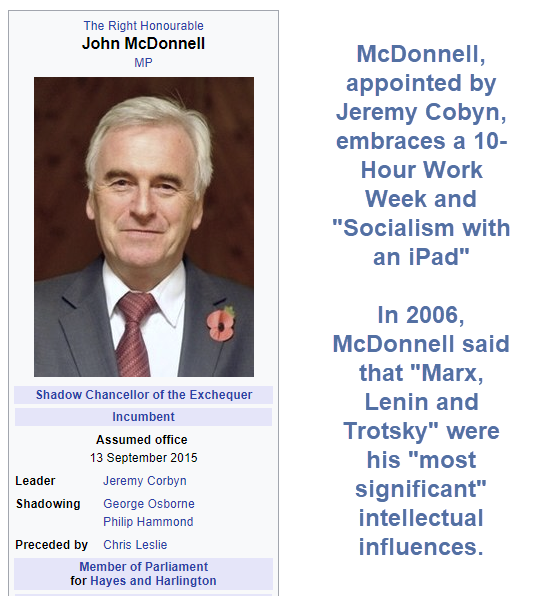 Socialism with an iPad

Following Jeremy Corbyn’s election as Labour leader in 2015, he appointed McDonnell as his Shadow Chancellor. Alongside Corbyn, McDonnell has been seen as a key figure on the left-wing of the party. As Shadow Chancellor, McDonnell pledged to increase spending on infrastructure and research, describing his vision for the economy as “socialism with an iPad“.

In 2006, McDonnell said that “Marx, Lenin and Trotsky” were his “most significant” intellectual influences. Footage emerged of McDonnell in 2013 talking about the 2008 global financial crisis and stating, “I’ve been waiting for this for a generation! We’ve got to demand systemic change. Look, I’m straight, I’m honest with people: I’m a Marxist.”

The Government continues to fail on climate change.
And even some of the Tory leadership candidates have close links to climate change denial.

Labour will deliver the Green Industrial Revolution our country – and our world – needs. ?
Stand with us ? https://t.co/4jz4F5mbYD pic.twitter.com/dgv1NkMurd

The inspiration for this obviously mad work time limit is a publication by Philipp Frey: The Ecological Limits of Work.

That is not enough to save the planet, but a 75% net reduction reduction in hours worked, varying by country, along with other improvements, allegedly will.

The Government continues to fail on climate change.
And even some of the Tory leadership candidates have close links to climate change denial.

Labour will deliver the Green Industrial Revolution our country – and our world – needs. ?
Stand with us ? https://t.co/4jz4F5mbYD pic.twitter.com/dgv1NkMurd

The study claims “Actual working hours levels vastly exceed the levels that might be considered sustainable.”

Unfortunately, “Working time reduction as an isolated policy by itself will likely be insufficient to combat climate change.”

The report concludes “In addition to shortening the working week quantitatively and pushing for a substantial reconfiguration of the economy, a more qualitative approach to a politics of time might also be needed.“

Just when you thought the global warming madness could not quickly get any nuttier, it quickly got nuttier.

If you support Labour leader Jeremy Corbyn who praises the economic model of Venezuela or McDonnell, a Marxist who embraces a 10-hour work week, your head is not screwed on straight.