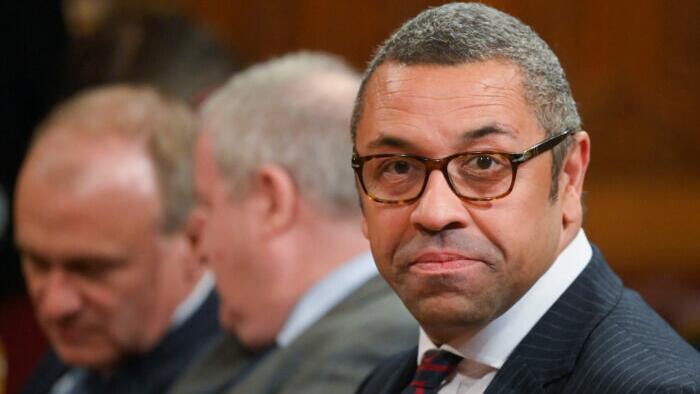 Authored by Lily Zhou via The Epoch Times,

Foreign Office minister David Rutley told Parliament earlier in the day that the department will demand a “full and thorough explanation” from the Chinese ambassador.

Edward Lawrence, a BBC reporter in China, was arrested in Shanghai on Sunday while reporting on protests against the communist regime’s zero-COVID policy.

A BBC statement said Lawrence was handcuffed, beaten, kicked, and held for a few hours before being released.

Footage circulated online appeared to show Lawrence being tackled to the ground by a group of police and taken away. The crowd could be heard chanting, “Release the man.”

The BBC on Sunday said no official explanation or apology had been given “beyond a claim by the officials who later released him that they had arrested him for his own good in case he caught Covid from the crowd.”

On Tuesday, Zhao accused the British public broadcaster of always “distorting the truth,” lambasting the broadcaster’s reporting on the pro-democracy protests in Hong Kong, human rights abuses in Xinjiang, and the zero-COVID policy in mainland China.

“The UK side must respect facts, be prudent in what it says or does and stop its practice of double standards,” Zhao said.

Speaking to reporters at NATO foreign ministers’ meeting in Bucharest, Cleverly confirmed he had summoned the Chinese ambassador.

Answering urgent questions in Parliament, Rutley reiterated Cleverly’s earlier statement saying the arrest of Lawrence was “deeply disturbing and wholly unacceptable,” and that “journalists must be able to do their job without fear of arrest or intimidation.”

Commenting on the BBC’s statement that Lawrence was beaten and kicked by police during his arrest and was held for several hours, Rutley told MPs, “In response, we are calling in the Chinese ambassador to make clear the unacceptable and unwarranted nature of these actions, the importance of freedom of speech, and to demand a full and thorough explanation.”

He said the UK government recognises that the COVID-19 restrictions in China are “challenging for the Chinese people,” and urged the Chinese authorities to “respect the rights of those who decide to express their views about the situation.”

Government Urged to ‘Get Serious With China’

The incident comes as the relationship between the UK government and China’s ruling Communist Party (CCP) becomes increasingly strained following Beijing’s upending of democracy and the rule of law in Hong Kong, its reciprocal sanctioning of British politicians who are vocal critics of the CCP’s human rights abuses in Xinjiang, and the beating of a Hong Kong protester at the Chinese Consulate General in Manchester.

The BBC has also been targeted by the CCP after the UK revoked the license of the Chinese state-controlled CGTN network.

British Prime Minister Rishi Sunak on Monday said the so-called “golden era” of the Sino–British relationship is over, and said the UK will strengthen its resilience and economic security.

But he stopped short of calling the Chinese regime a threat, and said the UK will stand up to the UK’s competitors with “robust pragmatism” instead of “grand rhetoric” and “simplistic Cold War rhetoric,” irking China hawks in Parliament.

A man is arrested while people gather on a street in Shanghai to protest on Nov. 27, 2022. (Hector Retamal/AFP via Getty Images)

Shannon said the arrest and assault of Lawrence is not the first attack on freedom of speech, but “just another example in the long line of journalists and human rights defenders, who are silenced, arrested, or simply disappear by the CCP.”

He welcomed Sunak’s commitment that the golden era of China and UK relations is over, and urged the prime minister to follow up with “tougher actions” to “protect British citizens, human rights defenders, pro-democracy activists, and religious and ethnic minorities targeted by the CCP.”

Rutley responded by saying Shannon’s points will be raised with the Chinese ambassador.

Former ministers Jacob Rees-Mogg and Tim Loughton questioned the use of summoning Zhao.

“We have had an awful lot of calling in the Chinese ambassador. If robust pragmatism is to mean anything, should there not be clear consequences?” Loughton asked.

He urged the government to expel Manchester Consul General Zhao Xiyuan, who admitted to pulling the hair of a protester, and sanction Chinese officials oppressing protests in China.

“When are we going to get serious about China?” he asked.

Rees-Mogg said the UK should also “take tougher action in international forums” and “do things that the Chinese would not want us to do” to show the UK is “not a pushover” and “not going to support the communist running dogs.”

Rutley told MPs the government is waiting for the conclusion of a police investigation into the Manchester incident, saying it will take action after seeing the process through.