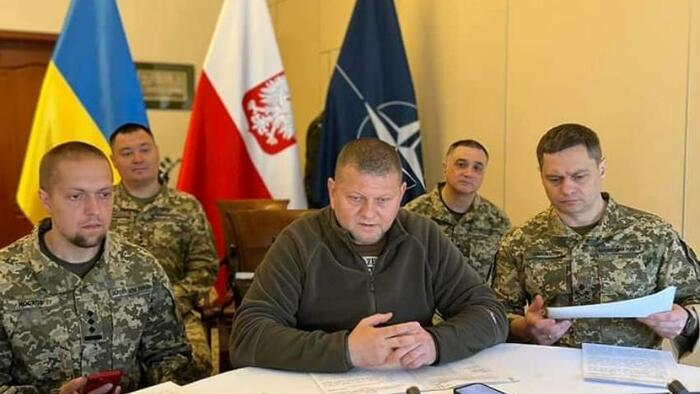 Ukraine’s top military chief has warned that Russia could unleash nukes if its army is against the ropes in Ukraine. The comments were issued Wednesday amid an ongoing Ukrainian counteroffensive in the south and east which both Kiev and Washington say has so far had “success”.

Commander-in-Chief of the Armed Forces Gen. Valery Zaluzhny stated “There is a direct threat of the use, under certain circumstances, of tactical nuclear weapons by the Russian armed forces.” He wrote this in an op-ed published by state run outlet Ukrinform, with the alarming words being picked up by The Washington Post and others.

“It is also impossible to completely rule out the possibility of the direct involvement of the world’s leading countries in a ‘limited’ nuclear conflict, in which the prospect of World War III is already directly visible,” Zaluzhny added.

The top commander further issued his first official confirmation that the unprecedented large strikes on Russia’s Crimea bases and an arms depot widely reported in August were Ukrainian operations. The initial early August huge Saki air base explosion had previously only been acknowledged as a Ukrainian strike via anonymous leaks to Western media outlets by senior Kiev officials.

At around the same time as those opening Crimea attacks, which have continued sporadically since then, President Zelensky vowed to “liberate” the Russian-held territory, which the Kremlin gained control of after a 2014 popular referendum, which wasn’t recognized by Europe or the US.

According to Gen. Zaluzhny’s words as featured in The Washington Post:

With the fighting all but certain to continue into 2023, Ukraine has to make the war “even sharper and more tangible for the Russians and for other occupied regions, despite the massive distance to the targets,” Zaluzhny wrote.

He called the Crimean strikes a “convincing example” of Kyiv’s calls for allies to send longer-range weapons for its outgunned soldiers. Moscow, he said, can hit 20 times farther.

Moscow for its part has also expressed alarm over the potential for nuclear-armed confrontation with the West over Ukraine, given Washington’s steadily growing involvement – especially the billions of dollars in weapons and military aid being poured into the Ukrainian side. It has also rejected charges that it is prepared to use nukes.

Per Reuters, he stressed Russia’s official position, explaining that nuclear arms could only be used in “response to weapons of mass destruction or a conventional weapons attack that threatened the existence of the Russian state.”