UN Seeks $4 To 6 Trillion Per Year To Address Climate 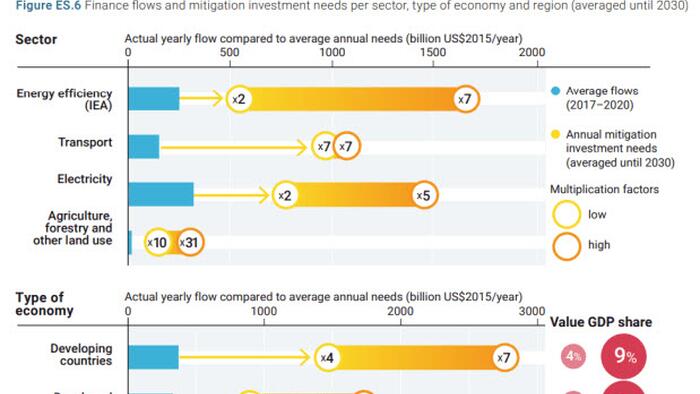 Authored by Mike Shedlock via MishTalk.com,

The UN has an interesting report on investments needed to address climate change. Let’s tune in…

The Guardian reports UN finds ‘no credible pathway to 1.5C in place’

The UN environment report analysed the gap between the CO2 cuts pledged by countries and the cuts needed to limit any rise in global temperature to 1.5C, the internationally agreed target. Progress has been “woefully inadequate” it concluded.

Current pledges for action by 2030, if delivered in full, would mean a rise in global heating of about 2.5C and catastrophic extreme weather around the world. A rise of 1C to date has caused climate disasters in countries from Pakistan to Puerto Rico.

If the long-term pledges by countries to hit net zero emissions by 2050 were delivered, global temperature would rise by 1.8C. But the glacial pace of action means meeting even this temperature limit was not credible, the UN report said.

A study published this week found “large consensus” across all published research that new oil and gas fields are “incompatible” with the 1.5C target.

What Would It Cost?

Hooray! Only $4 trillion to 6 trillion per year.

“A global transformation from a heavily fossil fuel- and unsustainable land use-dependent economy to a low-carbon economy is expected to require investments of at least US$4–6 trillion a year,” stated the UN report (page 26 of 132).

Q: US$4–6 trillion a year for how many years?
A: Based on figure ES.6 (lead chart) least eight years.

And developing countries will gladly fork over up to 9 percent of GDP every year for eight years.

To the shock of everyone with any semblance of common sense, we are clearcutting forests and burning the trees based on the idea the process is carbon neutral.

Gear up for a cold Winter in France. The protests have started already.