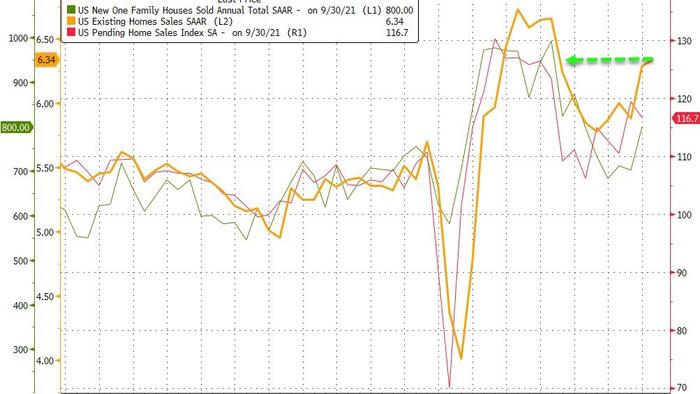 After September’s surprise 7.0% MoM surge in existing home sales, analysts expected a modest 1.4% MoM retracement in October but they once again under-estimated the wall of money coming from ‘investors’ (rather than average joe Americans).

That pushed Existing Home Sales SAAR to 6.34mm (on track to exceed 6 million this year, which would be the strongest since 2006).

“Inflationary pressures, such as fast-rising rents and increasing consumer prices, may have some prospective buyers seeking the protection of a fixed, consistent mortgage payment,” Lawrence Yun, NAR’s chief economist, said in a statement.

The gain in October purchases reflected stronger results in the upper-end market, whereas sales for cheaper properties were restrained because of a lack of inventory.

There were only 1.25 million homes for sale last month, down 12% from a year ago. At the current pace it would take 2.4 months to sell all the homes on the market.

And finally, home-buying confidence is at record lows among ‘average joe’ Americans…

Investors, who make up many of cash sales, comprised 17% of October contract signings. That compares with 13% in September and 14% a year earlier.