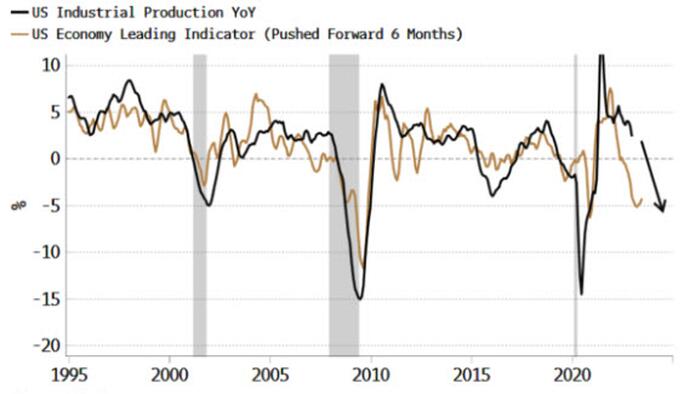 US stocks are vulnerable to a further decline of as much as 25% from a deeper-than-anticipated US recession.

Ebullient markets are marking down the odds of a recession.

“Immaculate disinflation” is the current zeitgeist, where inflation continues to slow and the US experiences only a mild recession, or avoids one altogether.

But markets are not economies. While there are feedback loops between the two, just because the market is gunning for a softer outcome will not necessarily make it so.

Recession prediction is not easy. Many indicators are useful for gauging recession risk, but they can be inconsistent and give false signals. However, combining indicators together and noting when many of them expect a recession at the same time gives a much stronger signal. Today multiple indicators are flashing recession (the latest being Monday’s release of the Conference Board’s Leading Index), giving a high degree of confidence the US will enter one this year.

It is likely to be a worse recession than currently expected. The steep inversion of the yield curve has been used to posit the recession will be severe. However, there is not a particularly strong relationship between the yield curve and recession depth. What does have a more significant relationship is the peak-to-trough decline in the 3m-10y yield curve. The current fall in the curve would put the maximum trough in real GDP at 5%, which is the average drop for recessions over the last 50 years.

This is still larger than economists’ expectations, which currently foresee about a 1.5% trough in GDP.

Indeed, economists typically overestimate GDP in recessions. The larger blue bars to the left-hand side of the chart below show that economists more frequently believe GDP will be higher than it turns out to be in recessions, versus when there is no recession.

The data also show the economists’ overestimates are larger in downturns.

A fairly deep recession can also be inferred by cyclical leading indicators.

The chart below shows my leading indicator for the US, based on leading inputs such as ISM data, housing data, and credit spreads. It aims to give a 6-month lead on US growth, and shows a steep fall in the coming months.

Stocks are currently pricing only about a 60% chance of a recession, and this continues to moderate as stocks rally.

However, equities face quite significant further downside if we get a recession. There is a good relationship between the peak size of the yield-curve’s inversion (2s10s) prior to a recession and the maximum drawdown in the S&P. The current peak inversion of the curve infers a maximum drawdown for the S&P of ~38%, which is up to another ~25% fall from today’s price (i.e. as low as 3000).

That’s not pretty, but as the chart above shows, the depth of the yield curve’s inversion has typically meant a less severe equity drawdown. Greater yield-curve inversions have historically led to more Fed cuts, mitigating the fall in stocks. Today’s deepish curve inversion therefore indicates equities should be “cushioned” from even greater declines.

[ZH: Although we note that skew has started to rise recently…]

As with any data analysis, caveats should be noted around sample size (especially when dealing with recessions), and the in-sample/out-of-sample historical record. Nonetheless, it is still preferable to making inferences based on the current state of play without regard to the past – history should be used as an anchor for today’s forecasts about the future.

And history shows that immaculate disinflation, like its biblical parallel, is highly unlikely.