WARNING: THEIR GUILLOTINES ARE ALREADY IN PLACE! 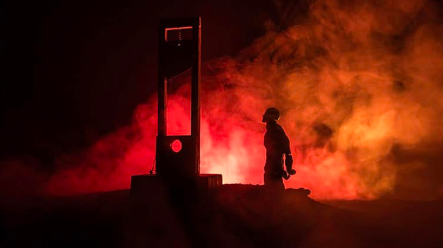 “And I will put enmity between thee and the woman, and between thy seed and her seed; it shall bruise thy head, and thou shalt bruise his heel.”

Steve Quayle: “One of the most fundamental scriptures in the entire word of God is Genesis 3:15. The verse spells out how Satan will forever be the enemy of mankind, and those people who side with Satan will be in a perpetual war with God’s elect. Plainly stated: there is a very real, very dangerous, battle between good and evil going on. The topic of guillotines, even the image of guillotines, is one of the most symbolic images of war, rebellion, and revolution. Obviously, the French Revolution brought the guillotine and the beheading of the aristocracy to the forefront of history. But 26 years ago, when I started broadcasting on shortwave radio, I was being interviewed by various talk-radio hosts when the hot news concerning modern-day guillotines came on the scene. Stories persisted from Long Beach Harbor of crates being unloaded that broke open on the docks, spilling their contents for everyone to see. Couple those eyewitness accounts with consistent rumors from the military, civilian contractors, and underground base builders (as well as the infamous FEMA camps), and all these stories share a commonality: guillotines have been pre-positioned for some future event. So the question is, when will these ‘perfect killing machines’ be called into action?

After 911, and the beheading of Danny Pearl (LINK: Daniel Pearl), something was loosed upon this earth. The blood spilled in the practice of beheading decorated the world’s headlines, as various terrorist groups beheaded their enemies on camera, bringing a new dynamic to their crusade against the world. The brutality of beheading, from the very darkest days in ancient history, is rising to strike again in modernity. Also similar to ancient history, our children who’ve never had a chance to be born, are being aborted and sacrificed to the false god Moloch to appease the blood-lust of demons. And now things have progressed even further. Unholy drugs and vaccines are sterilizing and destroying humanity’s ability to reproduce. This new level of evil is targeting children before they even have a chance to form! The percentage of child-less parents is about to skyrocket, ensuring the eventual extinction of the human race.

Within this PRIVATE BRIEFING is a chart showing the literal states and number of the guillotines (and crematorium ovens that will take care of the remains of those slaughtered) waiting to be deployed in the murder of Believers. These mass-deaths will be the ultimate ritual sacrifice, fulfilling the Scriptures that lead up to the battle of Armageddon and the Second Coming of our Lord Jesus. I’ve dedicated over 10,000 hours of broadcast time to these topics in an effort to warn as many as I can about what is coming. It is now time for you to take it to the Lord in prayer. Human sacrifice, child sacrifice, cannibalism, and every form of debauchery is accelerating onto the world stage, with gruesome ramifications that need not even be discussed. What’s ironic, in a macabre sort-of-way, is the fact that I was praying about the content of this BRIEFING when I received a satire email from an internet ministry advertising for guillotine operators! They intended their headline to be satire, but when I saw the headline it was a second witness that it was time to release the information you’re receiving today.

Over the years, one of the hardest things to convey to people is the seriousness of spiritual warfare, and the plans of the enemy in these last days. So many are attempting to be soldiers in this war, but they do not understand the satanic power and rage that has been lined up against them. Many just ‘fiddle with the devil’ under their own power, but it’s only through the blood of Jesus and the word of your testimony (and NOT loving our lives under death), can we submit ourselves to God and resist the enemy. Only then do we have functional authority against this supernatural evil. Let the theologians argue all they wish about the wrath of God being poured out on the Earth. They are unable to correctly differentiate the ‘Wrath of God’ that will come down against the devil and his followers, with Satan’s wrath that is manifesting right now against God and his children! Ladies & gentlemen, FEMA Camps are real–deep underground military bases are real–and the plans to destroy every human being (and our ability to reproduce) are a very real and dangerous reality. God’s people are destroyed for lack of knowledge, not understanding what lies ahead. It’s time to stand and fight as if the entire future of the human race depended upon it! I pray that you review the enclosed information prayerfully and carefully, acting upon it as the Living God directs each one of you. We can no longer idly sit by, watching God’s image and likeness (us!) be destroyed in the most sinister ways imaginable.

The Bible is very clear that God will let the wicked be destroyed by their own devices. It’s also very clear that goodness and mercy will follow the lives of the Believers as they dwell in the secret place of the Most High (Psalm 91 link). We were at that time in history. The prophets of old foresaw these unfolding events and warned us what would come to pass. Let us now understand and heed their warning. The book of Hebrews says that: ‘Seeing we are surrounded by such a great cloud of witnesses, let us run the race set before us…’ We must join the race and fight against humanity’s extinction!

“And I saw thrones, and they sat upon them, and judgment was given unto them: and I saw the souls of them that were beheaded for the witness of Jesus, and for the word of God, and which had not worshipped the beast, neither his image, neither had received His mark upon their foreheads, or in their hands; and they lived and reigned with Christ a thousand years.”