Welcome to NATO, Finland and Sweden 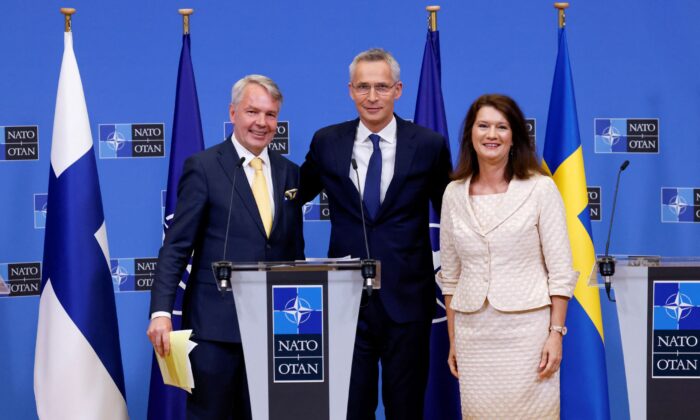 There is a phenomenon in social sciences called the “law of unintended consequences.” Basically, this is when the outcome of a purposeful action is unexpected or unforeseen. In other words, someone does A expecting B, but instead gets C. Unintended consequences can be positive—such as when the IRS sends you a tax refund that you hadn’t anticipated—but usually, they are negative.

Russian President Vladimir Putin must have been absent from class that day, but he is learning the power of the law of unintended consequences almost every day. His invasion of Ukraine couldn’t have gone more wrong. He has failed to extinguish Ukraine as an independent state—if anything, he has only fortified Ukrainian nationalism—and devastated his own military.

More than that, Putin put in motion forces to further strengthen the NATO alliance and cause the Western nations to align more tightly than ever before. The most important of these outcomes has been the parallel decisions by Sweden and Finland to join NATO.

As I’ve said before, this is something I thought would never happen in my lifetime. Sweden and Finland signed the accession protocols in July to begin the process of joining NATO. Full Swedish and Finnish membership in the Atlantic Alliance is likely within a year, probably less.

This expansion of NATO is nothing short of earth-shattering. During the Cold War especially, the idea of Swedish or Finnish membership in the Atlantic Alliance was nothing short of heresy in Stockholm and Helsinki. Swedish and Finnish politicians ruined their careers by even raising the prospect of considering the idea of joining NATO.

Finland was often considered so overly solicitous, obsequious even, of the Soviet Union that its name coined a term—Finlandization—to describe an accommodationist foreign policy toward nearby autocrats. During the Cold War, Helsinki banned hundreds of books and films deemed anti-Soviet, such as Aleksandr Solzhenitsyn’s “One Day in the Life of Ivan Denisovich.”

Finland saw it differently, of course, a necessary bit of realpolitik that successfully preserved itself as a democratic, free-market state.

In any event, if not for Putin’s attack on Ukraine, Stockholm and Helsinki were probably prepared to remain militarily nonaligned in perpetuity. And it wasn’t simply the fact that both countries signed onto NATO but that they did it so fast. Political decision-making in multiparty social democracies like Sweden and Finland is often glacial, yet both countries made the choice to join the Atlantic Alliance within the span of a few months.

What does the West get from Swedish and Finnish membership in NATO? In short, a lot. Adding these two countries to the alliance greatly shores up its northern flank, which has always been a weak link in NATO’s defenses.

The Swedish armed forces, for example, comprise around 27,000 active-duty servicemen and women—professional, volunteer, and conscripts, as well as on-duty reservists. Total reserves number add another 11,000 soldiers, and the Home Guard (territorial defense forces) yet another 22,000. Sweden currently plans to roughly double the size of the armed forces—for example, to around 90,000 soldiers—by 2025.

The Swedish Air Force operates around 100 locally made JAS-39 Gripen fighter jets; 60 of these will be replaced with the ultra-modern Gripen-E series, while the Swedish Navy comprises five submarines, seven corvettes, and 13 patrol boats.

Finnish Air Force, for its part, comprises 62 U.S.-built F/A-18C/D fighter aircraft. These are scheduled to be replaced by 64 F-35 Joint Strike Fighters, with deliveries beginning later this decade. Primary ships in the Finnish navy are eight corvettes and 13 minesweepers.

Together, Sweden and Finland bring to NATO around 370 main battle tanks, over 2,000 other armored vehicles, 15 corvettes, 13 missile-patrol boats, five submarines, and over 160 modern fighter jets. These forces are equipped with various stand-off precision-strike weapons and antitank munitions. Moreover, these two countries move NATO’s integrated air and missile defenses hundreds of miles further east to the Russian border itself.

In practically one fell swoop, Putin has created a nightmare scenario. He now has to deal with the prospect of NATO sharing an additional 830 miles of border with Russia, backed up by hundreds of thousands of new NATO troops, hundreds of tanks and modern fighter jets, and thousands of missiles of all types. Against this formidable force, he has little with which to counter, especially given how much the Ukraine war has depleted his military. Again, he has no one to blame but himself.

Richard A. Bitzinger is an independent international security analyst. He was previously a senior fellow with the Military Transformations Program at the S. Rajaratnam School of International Studies (RSIS) in Singapore, and he has held jobs in the U.S. government and at various think tanks. His research focuses on security and defense issues relating to the Asia-Pacific region, including the rise of China as a military power, and military modernization and arms proliferation in the region.
(Visited 1 times, 1 visits today)