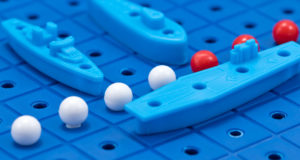 Given the immense turmoil occurring in at least one Asian nation this month, President Trump’s first visit to the continent could be full of surprises.

Trump has been verbally sparring with none other that Kim Jong Un, the “supreme” leader of North Korea, and bonafide madman over the course of the last 11 months.  Kim, sensing an opportunity to rile up a newly minted U.S. leader in exchange for precious attention on the world’s stage, began haphazardly firing off rockets off al shapes and sizes, some successful, others not so much, in an effort to keep the President’s attention.  Furthermore, his recent testing of a possible hydrogen bomb deep underground has alarmed not only U.S. officials, but observers around the planet.

Now, as Donald Trump prepares to head to Asia for the first time in his fledgling presidency, the U.S. military is putting together one heck of an entourage, specifically in the Western Pacific Ocean.

“The USS Nimitz joined the Roosevelt and Reagan in the region. The Nimitz announcement came a day after the Roosevelt entered the western Pacific.

The American military buildup in the region has been ongoing for months, and has intensified in direct correlation to the amount of drivel and propaganda being spewed forth by Kim and his DPRK derelicts.

Given the dainty dictator’s affinity for symbolic gestures, it would be unlikely for Donald Trump’s visit to Asia to not include at least one military misstep by the North Koreans in an effort to continue putting pressure on the United States.  With three carrier groups lurking off the coast, however, Kim may find it wise to refrain from poking the bear, seeing as that bear is essentially parked on his doorstep.