What War Between The US & Iran Could Look Like 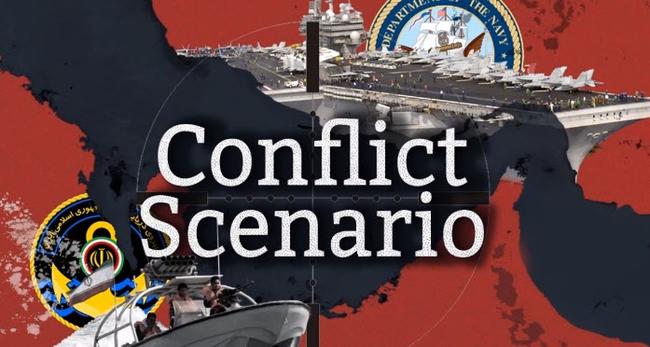 The US-Iranian standoff in the Persian Gulf has once again entered an acute phase...

On April 22, US President Donald Trump announced that he had ordered the US Navy to “shoot down and destroy” Iranian gunboats that follow or harass US ships. In response, Commander-in-chief of the Islamic Revolution Guards Corps, Major General Hossein Salami declared on April 23 that Iran will provide a swift, “decisive” and “effective” response to US forces if they threaten Iranian “vessels or warships”.

One of the reasons behind the escalation is the consistent and strengthening anti-Iranian rhetoric of the White House as a part of Trump’s presidential campaign. Another driving force of the US actions is likely the sharpening global economic crisis and the turmoil on the energy market that has led to the dramatic collapse of oil prices. Indeed, a new conflict in the Persian Gulf could theoretically return the oil prices to $50-60 per barrel.

In the current situation, Iran is not interested in an escalation of the conflict with the United States. The escalation could, however, be instigated by the US military:

Iranian forces would have to respond to such a provocation. Thus, a military confrontation could start. After initiating a localized military incident, the White House would accuse Iran of aggressive actions against US forces and the US navy could carry out a demonstrative missile strike on a target or several targets inside Iran. Such an attack would prompt an Iranian response that would involve both its regular and irregular warfare capabilities.

The IRGC Navy doctrine reflects irregular warfare principles that include the use of surprise, deception, speed, flexibility and adaptability, decentralization and highly mobile and maneuverable units,  all of which are used at sea. These include hit-and-run style surprise attacks or the amassing of large numbers of means and measures to overwhelm the enemies’ defenses. In this scenario the employed naval forces might be described as a mosquito-like swarm of small boats using their size and maneuverability to track and hunt down enemy warships.

The IRGCN’s mosquito-fleet concept enables rapid formation of tactical groups of small crafts to carry out a surprise strike at any given time from different directions in a particular area of the offshore zone. Such groups can deploy in attack formation immediately prior to reaching the area of the attack.

Crafts from the formation reach their assault line position either independently or in small groups. This is the way the Iranian Navy would employ the swarm concept. It is important to note the high motivation and ideological training of the mariners involved, who well understand the high level of threat to them personally in the event of the employment of this tactical scheme. IRGCN personnel are motivated and ready to accomplish any feat to defend their homeland. This factor (the high motivation of the personnel) makes a mosquito-fleet armed with missile, torpedo and anti-air weapons especially dangerous to naval forces of the US.

The aircraft carriers and large warships of the US naval group would become the main priority target of the Iranian response. In the event that the Iranian attack succeeds, the US would have to carry out a massive strike on Iranian infrastructure objects or political and military command centers. Tehran would have either to accept their defeat in this limited confrontation or to respond with another attack on US forces in the region.

Current US military doctrine dictates the prior employment of mobile interoperable forces, unmanned and robotized systems, as well as massive strikes with high precision weapons in conjunction with the maximum usage of electronic warfare and information warfare. If the confrontation develops further the US would be forced to conduct a limited landing operation on key parts of the Iranian coast. The success of such a limited operation under the likely condition of a strong Iranian military response is improbable. Furthermore, the move would be hampered by the weak psychological condition of US service members caused by current developments inside the US.

The US military would have to either retreat or venture on to a large-scale military operation in the Persian Gulf region. If the number of forces involved does not allow Washington to deliver a devastating blow to Iran within 1-2 weeks, China or Russia could intervene in some form likely turning the military standoff into a frozen conflict.

It is likely that despite all difficulties, the US would be able to create an occupation zone inside Iran, likely in the coastal area near the Strait of Hormuz.

The Iranian oil trade would be fully blocked and the US shale industry would be rescued. At the same time, Washington would have to deal with a permanent insurgency in the occupied area.

Another possible scenario is the defeat of the United States in this limited conflict because of significant losses in warships, aviation and service members of the involved interoperable forces.

In this case, US influence in the region would be drastically undermined and the White House would start drawing up plans of revenge.