On Thursday morning, traders were stumped by a violent drop in 3m USD Libor, which after weeks of barely budging, saw its fixing plunge by more than 4bps, its biggest one day move since the financial crisis, prompting questions what was behind the sudden drop.

The move followed a declining trend in commercial paper yields, which banks use as one of the primary inputs in their Libor submissions.

According to Deutsche Bank’s Steven Zeng, a significant factor for the decline of commercial paper yields is the recent inflows into prime money market funds. Since December, prime money market funds have grown their assets by about 11%, with this week’s ICI data showing that total prime fund assets rose above $600bn for the first time since 2016. And as prime fund assets grow, cash is being deployed in the unsecured borrowing markets, pushing their rates lower.

So was Libor just catching up to CP?

According to Zeng there’s more to the sudden jerk lower in the world’s most important fixed income benchmark; in a Friday note, the Deutsche Banker writes that while the Fed hikes have attracted more cash into the short end, the yield-curve inversion has likely also played an important contributing role. At the moment, the Treasury curve is inverted between the 1yr and 5yr points. Furthermore, yields out to the 10yr point are at levels below the 3m Libor.

And while curve inversions are rare, inversions while the economy looks healthy and the Fed maintains that it could still possibly hike rates are even rarer. In other words, with the 3m Libor currently 21bp above the 2yr Treasury yield and 23bp above the 5yr yield, some investors are finding money market investments a much more appealing option than front-end and intermediate Treasuries. 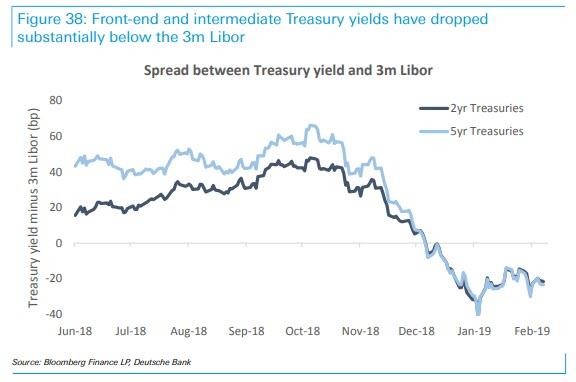 Yet even after Thursday’s decline, Libor remains elevated to commercial paper yields. The gap between the 3m Libor and 90-day AA financial CP yield currently stands at 19bp, which compares to last year’s average of 13bp. This suggests to Zeng that Libor may have modest additional downside risk in the near term.