Where Most Aid To Ukraine Comes From 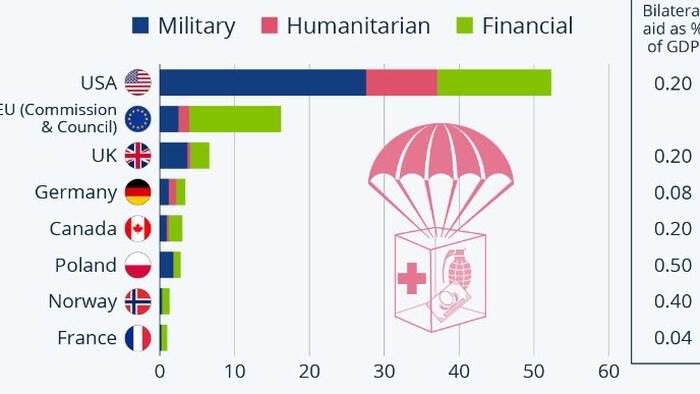 The United States has pledged more than 52 billion euros in military, financial and humanitarian aid to Ukraine since the war began in February 2022 and October 3.

According to the pioneers of the tracker at the Kiel Institute for the World Economy, the U.S. pledged a sum of close to 12 billion euros in recent weeks, while EU countries and institutions committed just 1.4 billion euros.

“The U.S. is now committing nearly twice as much as all EU countries and institutions combined. This is a meager showing for the bigger European countries, especially since many of their pledges are arriving in Ukraine with long delays. The low volume of new commitments in the summer now appears to be continuing systematically.”

Despite these figures being comparatively low to the U.S., when considering bilateral aid in terms of a percentage of GDP, several European countries come out on top with Latvia (0.9 percent), Estonia (0.8 percent) and Poland (0.5 percent) as the most generous donors.

The U.S. then ranks eighth, as it provides 0.2 percent of its GDP.