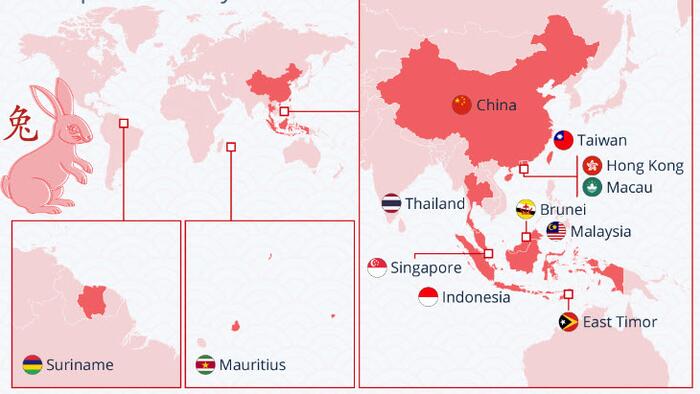 For around 1.4 billion Chinese, the new year begins on January 22 – unlike in the Gregorian calendar, China calculates its traditional new year’s date according to the lunar cycle. While various Asian nations also celebrate their own Lunar New Year festivals, the Chinese New Year is in fact a public holiday in several nations around the world, not just in the People’s Republic.

As Statista’s Katharina Buchholz shows in the chart below, Southeast Asia is the region in which most countries give their citizens time off for the beginning of the Chinese New Year. These include Singapore, Indonesia and Malaysia. In recent years, the Chinese New Year has also been introduced as a special holiday in the Philippines, but according to local media reports as of January 14, there will be no separate days off this year. South Korea and Vietnam also organize celebrations at the beginning of the lunar year, but these differ in part from the customs of the Chinese New Year and are more likely to be shaped by national culture.

While the majority of the countries and territories that explicitly celebrate the Chinese New Year are in Asia, there are two exceptions.

In Suriname in South America, the turn of the year in both the Gregorian and the lunar calendar are public holidays. According to the official census, around seven percent of the approximately 618,000 inhabitants are of Chinese descent.

The island state of Mauritius in the Indian Ocean also celebrates the Chinese New Year, although only about three percent of the approximately 1.3 million inhabitants have Chinese roots. In the 19th and the first half of the 20th century, the island was a popular emigration destination for Chinese from the province of Guangdong, also referred to as Canton at the time.

Chinese New Year celebrations are spread over the course two weeks and usually triggers an increased volume of travel, one of the largest waves of migration in the world. The festivities also mark the official start of spring, which is why the Lunar New Year is also known as Chūnjié or Spring Festival. According to the official lunar calendar, 2023 is the year of the rabbit, which last happened in 2011.