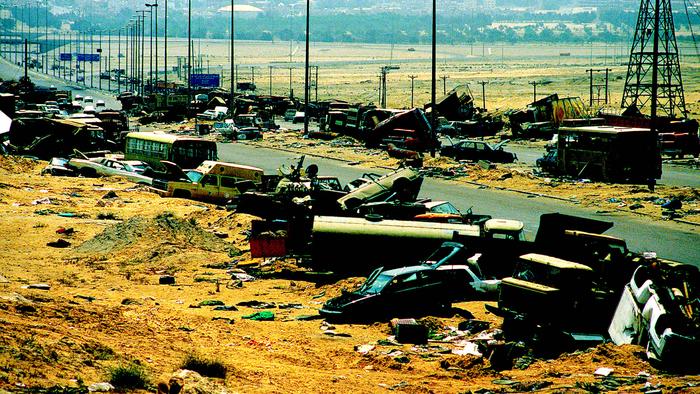 After a Russian commercial airliner was downed over Egypt’s Sinai in October 2015, Western media reported that the Islamic State bombing was retaliation against Russian airstrikes in Syria. The killing of 224 people, mostly Russian tourists on holiday, was matter-of-factly treated as an act of war by a fanatical group without an air force resorting to terrorism as a way to strike back.

Yet, Western militaries have killed infinitely more innocent civilians in the Middle East than Russia has. Then why won’t Western officials and media cite retaliation for that Western violence as a cause of terrorist attacks on New York, Paris and Brussels?

Instead, there’s a fierce determination not to make the same kinds of linkages that the press made so easily when it was Russia on the receiving end of terror. [See Consortium News’s Obama Ignores Russian Terror Victims.]

For example, throughout four hours of Sky News’ coverage of the July 7, 2005 attacks in London, only the briefest mention was made about a possible motive for that horrific assault on three Underground trains and a bus, killing 52 people. But the attacks came just two years after Britain’s participation in the murderous invasion of Iraq.

Prime Minister Tony Blair, one of the Iraq War’s architects, condemned the loss of innocent life in London and linked the attacks to a G-8 summit he’d opened that morning. A TV host then read and belittled a 10-second claim of responsibility from a self-proclaimed Al Qaeda affiliate in Germany saying that the Iraq invasion was to blame. There was no more discussion about it.

To explain why these attacks happen is not to condone or justify terrorist outrages against innocent civilians. It is simply a responsibility of journalism, especially when the “why” is no mystery. It was fully explained by Mohammad Sidique Khan, one of the four London suicide bombers. Though speaking for only a tiny fraction of Muslims, he said in a videotaped recording before the attack:

“Your democratically-elected governments continuously perpetuate atrocities against my people all over the world. And your support of them makes you directly responsible, just as I am directly responsible for protecting and avenging my Muslim brothers and sisters. Until we feel security you will be our targets and until you stop the bombing, gassing, imprisonment and torture of my people we will not stop this fight. We are at war and I am a soldier. Now you too will taste the reality of this situation.”

The Islamic State published the following reason for carrying out the November 2015 Paris attacks:

“Let France and all nations following its path know that they will continue to be at the top of the target list for the Islamic State and that the scent of death will not leave their nostrils as long as they partake part in the crusader campaign … and boast about their war against Islam in France, and their strikes against Muslims in the lands of the Caliphate with their jets.”

Claiming It’s a State of Mind

Ignoring such clear statements of intent, we are instead served bromides by the likes of the State Department about the Brussels bombings, saying it is impossible “to get into the minds of those who carry out these attacks.”

Mind reading isn’t required, however. The Islamic State explicitly told us in a press statement why it did the Brussels attacks: “We promise black days for all crusader nations allied in their war against the Islamic State, in response to their aggressions against it.”

Yet, still struggling to explain why it happened, the State Department said, “I think it reflects more of an effort to inflict on who they see as Western or Westerners … fear that they can carry out these kinds of attacks and to attempt to lash out.”

The statement ascribed the motive to a state of mind: “I don’t know if this is about establishing a caliphate beyond the territorial gains that they’ve tried to make in Iraq and Syria, but it’s another aspect of Daesh’s kind of warped ideology that they’re carrying out these attacks on Europe and elsewhere if they can. … Whether it’s the hopes or the dreams or the aspirations of a certain people never justifies violence.”

After 9/11, President George W. Bush infamously said the US was attacked because “they hate our freedoms.” It’s a perfect example of a Western view that ascribes motives to Easterners without allowing them to speak for themselves or taking them seriously when they do.

Explaining his motive behind 9/11, Osama bin Laden, in his Letter to America, expressed anger about U.S. troops stationed on Saudi soil. Bin Laden asked: “Why are we fighting and opposing you? The answer is very simple: Because you attacked us and continue to attack us.” (Today the US has dozens of bases in seven countries in the region.)

During a Republican presidential debate in 2008 Rudy Giuliani, who was New York mayor on 9/11, became incensed and demanded Ron Paul withdraw his remark that the U.S. was attacked because of US violent interventions in Muslim countries.

“Have you ever read about the reasons they attacked us?” Paul said. “They attacked us because we have been over there. We’ve been bombing Iraq for ten years. I’m suggesting we listen to the people who attacked us and the reason they did it.“

“That’s an extraordinary statement,” responded Giuliani. “As someone who lived through the attack of Sept. 11, that we invited the attack, because we were attacking Iraq. I don’t think I’ve ever heard that before. And I’ve heard some pretty absurd explanations for Sept. 11.”

The audience had never heard it either, as they heartily cheered Giuliani. “And I would ask the Congressman to withdraw that comment and tell us that he didn’t really mean that,” Giuliani said.

So why won’t Western officials and corporate media take the jihadists’ statements of intent at face value? Why won’t they really tell us why we are attacked?

It seems to be an effort to cover up a long and ever more intense history of Western military and political intervention in the Middle East and the violent reactions it provokes, reactions that put innocent Western lives at risk. Indirect Western culpability in these terrorist acts is routinely suppressed, let alone evidence of direct Western involvement with terrorism.

Some government officials and journalists might delude themselves into believing that Western intervention in the Middle East is an attempt to protect civilians and spread democracy to the region, instead of bringing chaos and death to further the West’s strategic and economic aims. Other officials must know better.

A few might know the mostly hidden history of duplicitous and often reckless Western actions in the Middle East. It is hidden only to most Westerners, however. So it is worth looking in considerable detail at this appalling record of interference in the lives of millions of Muslims and peoples of other faiths to appreciate the full weight it exerts on the region. It can help explain anti-Western anger that spurs a few radicals to commit atrocities in the West.

The history is an unbroken string of interventions from the end of the First World War until today. It began after the war when Britain and France double-crossed the Arabs on promised independence for aiding them in victory over the Ottoman Empire. The secret 1916 Sykes-Picot accord divided the region between the European powers behind the Arabs’ backs. London and Paris created artificial nations from Ottoman provinces to be controlled by their installed kings and rulers with direct intervention when necessary.

What has followed for 100 years has been continuous efforts by Britain and France, superseded by the United States after the Second World War, to manage Western dominance over a rebellious region. The new Soviet government revealed the Sykes-Picot terms in November 1917 in Izvestia. When the war was over, the Arabs revolted against British and French duplicity. London and Paris then ruthlessly crushed the uprisings for independence.

France defeated a proclaimed Syrian government in a single day, July 24, 1920, at the Battle of Maysalun. Five years later there was a second Syrian revolt, replete with assassinations and sabotage, which took two years to suppress. If you walk through the souk in Old Damascus and look up at the corrugated iron roof you see tiny specks of daylight peeking through. Those are bullet holes from French war planes that massacred civilians below.

Britain put down a series of independence revolts in Iraq between 1920 and 1922, first with 100,000 British and Indian troops and then mostly with the first use of air power in counterinsurgency. Thousands of Arabs were killed. Britain also helped its installed King Abdullah put down rebellions in Jordan in 1921 and 1923.

London then faced an Arab revolt in Palestine lasting from 1936 to 1939, which it brutally crushed, killing about 4,000 Arabs. The next decade, Israeli terrorists drove the British out of Palestine in 1947, one of the rare instances when terrorists attained their political goals.

Germany and Italy, late to the Empire game, were next to invade North Africa and the Middle East at the start of the Second World War. They were driven out by British imperial forces (largely Indian) with U.S. help. Britain invaded and defeated nominally independent Iraq, which had sided with the Axis. With the Soviet Union, Britain also invaded and occupied Iran.

After the war, the U.S. assumed regional dominance under the guise of fending off Soviet regional influence. Just three years after Syrian independence from France, the two-year old Central Intelligence Agency engineered a Syrian coup in 1949 against a democratic, secular government. Why? Because it had balked at approving a Saudi pipeline plan that the U.S. favored. Washington installed Husni al-Za’im, a military dictator, who approved the plan.

Before the major invasion and air wars in Iraq and Libya of the past 15 years, the 1950s was the era of America’s most frequent, and mostly covert, involvement in the Middle East. The first coup of the Central Intelligence Agency was in Syria in March 1949. The Eisenhower administration then wanted to contain both Soviet influence and Arab nationalism, which revived the quest for an independent Arab nation. After a series of coups and counter-coups, Syria returned to democracy in 1955, leaning towards the Soviets.

A 1957 Eisenhower administration coup attempt in Syria, in which Jordan and Iraq were to invade the country after manufacturing a pretext, went horribly wrong, provoking a crisis that spun out of Washington’s control and brought the U.S. and Soviets to the brink of war.

Turkey put 50,000 troops on the Syrian border, threatening to invade. Soviet premier Nikita Khrushchev threatened Turkey with an implied nuclear attack and the U.S. got Ankara to back off. This sounds eerily familiar to what happened last month when Turkey again threatened to invade Syria and the U.S. put on the brakes. The main difference is that Saudi Arabia in 1957 was opposed to the invasion of Syria, while it was ready to join it last month. [See Consortiumnews.com’s Risking Nuclear War for Al Qaeda?]

In the 1950s, the U.S. also began its association with Islamic religious extremism to counter Soviet influence and contain secular Arab nationalism. “We should do everything possible to stress the ‘holy war’ aspect,” President Eisenhower told his Secretary of State John Foster Dulles. After the Cold War, religious extremists, some still tied to the West, became themselves the excuse for U.S. intervention.

Read the rest at Consortium News