Why China Will Win (In 1 Simple Chart) 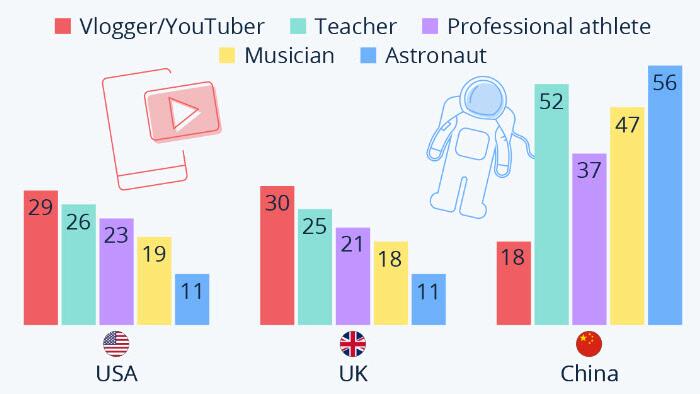 Becoming an astronaut has seemingly lost some of its glamor, at least in the United States and the United Kingdom, where children are three times more likely to want to be a social media influencer than to jet off into space.

However, in a potential sign of hegemonic things to come, Statista’s Anna Fleck notes that in China, the opposite is true, with more than half (56 percent) of 8 to 12-year-olds saying that they would most like to become an astronaut when they grow up and only 18 percent an influencer.

The following chart shows the responses of some 3,000 children who were asked which profession they are most drawn to, out of an influencer/YouTuber, astronaut, teacher, professional athlete and a musician, as part of a 2019 study by The Harris Poll and Lego Group. They could choose up to three options.

While the exact reason for the difference in aspirations is unknown, it likely comes down to a number of factors. Eric Berger from Ars Technica suggests that one possible reason could be that the education system in China places a higher emphasis on the value of science and space exploration.

After all, the survey also found that children in China showed more interest in space subjects than in the other two countries, and when asked about whether humans would eventually live on other planets or in outer space, 95 percent of Chinese children said they would want to live beyond Earth themselves, whereas in the U.S. and UK it was still high, but under 70 percent.

Or perhaps it is less to do with a lack of interest in space and more about the glamorization and relative exposure to social media per country. Where the United States and the United Kingdom have upped their social media usage in recent years, China has started to tighten its restrictions on such sites, especially when it comes to kids, citing the dangers of internet addiction and negative impacts on youths’ eyesight, concentration and mental health.

Measures have tightened further in the years since the survey took place, with a “youth mode” added to Douyin, the version of TikTok available in China, which does not permit children under the age of 14 to use it for more than 40 minutes a day or between the hours of 10 p.m. and 6 a.m. The app also reportedly shows more educational content (and more political censorship) than the international version. By contrast, social media has relatively few restrictions in the United Kingdom and the United States.