Why the UAE Is Embracing China and Shunning the US 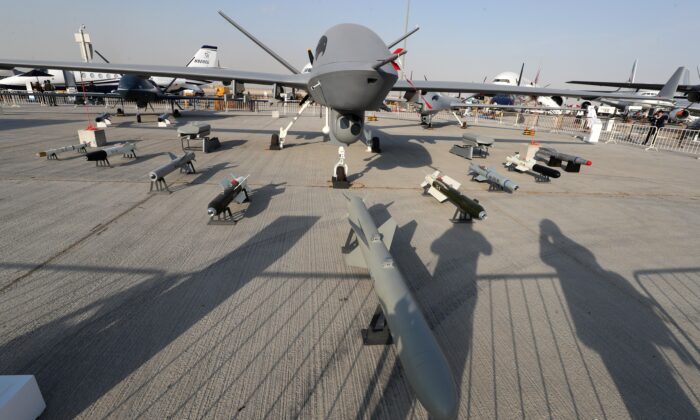 A picture taken on November 14, 2017 shows a Chinese-made Wing Loong II drone on display during the 2017 Dubai Airshow. (KARIM SAHIB/AFP via Getty Images)

In September, China and the United Arab Emirates (UAE) signed a rather significant memorandum of understanding. This agreement marked the first joint space project between the two countries. China will help the UAE, now one of the most powerful countries in the world, land its first rover on the moon. China and the UAE are growing closer; in fact, relations between the two countries are at an all-time high. However, this tightening embrace has come at the United States’ expense.

After House Speaker Nancy Pelosi’s largely unexpected August trip to Taiwan, the UAE was quick to reiterate its support for China. Specifically, in a rather provocative statement issued by the Ministry of Foreign Affairs, the Emirates “affirmed its support for China’s sovereignty and territorial integrity,” warning that “provocative visits” threatened the delicate ecosystem of international peace. The statement finished by emphasizing the importance of the “One-China” principle, a position held by the Chinese Communist Party (CCP) that there’s only one sovereign state under the name China and that Taiwan—officially called the Republic of China—contrary to popular belief, answers to Beijing. The statement didn’t need to mention the United States to be critical of the United States. For the UAE, a country in which 76 percent of the population identifies as Muslim, to throw such weight behind the CCP, a treacherous regime responsible for the suppression of the Uyghurs, a Muslim minority group based in Xinjiang, speaks volumes. It shows us how strong the bond between the UAE and China is. Sadly—for the United States, at least—this bond appears to be getting stronger by the day.

Thani bin Ahmed Al Zeyoudi, the UAE minister of state for foreign trade, recently announced that the Emirates, which is strategically located between Asia, Europe, and Africa, fully intends to solidify business relations in China. Al Zeyoudi spoke about shared “strategic visions and objectives,” and “a golden era of comprehensive economic relations between the two countries.” In the future, he added, both countries are eager to expand and diversify existing economic and commercial enterprises. The minister also mentioned collaboration in fields such as clean energy, infrastructure, and artificial intelligence (AI) research. The AI point is of particular importance largely because artificial intelligence now forms the foundation for all computer learning. From the medicine to self-driving vehicles, AI is redefining what it means to be human. The UAE has invested well over $2 billion in AI, while China has invested $17 billion. Thankfully, the United States has invested three times as much as China.

The UAE, a member of China’s Belt and Road Initiative, is a major recipient of investment from Beijing. Take the Khalifa Industrial Zone Abu Dhabi, an industrial hub located in the heart of the UAE’s capital, Abu Dhabi, for example. A subsidiary of Abu Dhabi Ports, Khalifa is one of the fastest-growing container ports in the world. Since 2019, China has invested well over 3.2 billion yuan ($505 million) in the port-integrated industrial zone. Today, more than 6,000 Chinese companies operate in the Emirates, and more than 300,000 Chinese live there. China is now the UAE’s top trading partner.

The United States should be deeply concerned by the close bond between the UAE and China, which, we’re told by the Chinese regime, is “as deep as the ocean and as firm as a rock. Our brotherhood has stood the test of time and is reinvigorated by the day.” The once rock-solid friendship between the UAE and the United States, however, is crumbling. In March, much to the embarrassment of the United States, the UAE’s Sheikh Mohammed bin Zayed al Nahyan, the country’s de-facto leader, refused to take a call with President Joe Biden. A couple of weeks later, to rub salt in the United States’ gaping wounds, Syrian President Bashar al-Assad arrived in the UAE for the first time since 2011, the year the Syrian civil war began. For well over a decade, Assad has been considered an enemy of the United States. During their terms in office, both Presidents Barack Obama and Donald Trump were highly critical of the Syrian dictator, and for good reason. The man is a monster. The UAE and China appear to think otherwise, viewing the Syrian in a considerably kindlier light.

In truth, China isn’t just friendly with the UAE and Syria; it’s friendly with virtually every single country in the Middle East, investing heavily in infrastructure, technology, and security initiatives. The growing alliance between the Middle East and China comes at the very same time as the United States loses its appeal in the region. China is now the largest investor in the Middle East, establishing strategic partnerships with the likes of Algeria, Egypt, Iran, Iraq, Jordan, Kuwait, Morocco, Oman, Qatar, Saudi Arabia, Turkey, and, of course, the UAE, one of the Middle East’s most dominant powers. Earlier in this short piece, I mentioned the UAE is located in a position of strategic importance. This fact is not lost on Beijing. The CCP has chosen Khalifa Port, the world’s largest container operator, as the base for all its Middle Eastern operations.

According to Joe Hepworth, the Middle East director for the OCO Global economic development consultancy, countries like the UAE should be viewed as staging points for Chinese operations in both Africa, the fastest growing continent in the world, and the Indian Ocean. Covering more than 70 percent of the earth’s surface, the Indian Ocean is rich in valuable minerals like manganese, nickel, cobalt, and copper. Moreover, the ocean is now a key player in both the oil and natural gas industries. For those who think China’s global grip is weakening, the CCP’s activities in the Middle East, Africa, and one of the world’s most important oceans in the world should give them cause for reflection.