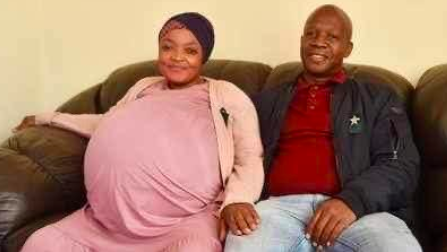 Dectuplets!? A 37-year-old woman in South Africa reportedly gave birth to 10 live babies at once on Monday, breaking the Guinness World record according to reports.

Gosiame Thamara Sithole, a woman that lives in Johannesburg, gave birth to ten children — seven boys and three girls — at a hospital in Pretoria, the BBC reported.

According to the reports, Sithole was originally expecting eight babies but two were missed during her ultrasound.

“I am shocked by my pregnancy. It was tough at the beginning. I was sick. It was hard for me. It’s still tough but I am used to it now. I don’t feel the pain anymore, but it’s still a bit tough. I just pray for God to help me deliver all my children in a healthy condition, and for me and my children to come out alive. I would be pleased about it,” Sithole reportedly said.

In 2009, Nadya Suleman made headlines as the “Octomom” in the United States when she gave birth to eight babies at once.

That record was broken in May of this year when a woman in Morocco gave birth to nine.

Gosiame Thamara Sithole (37) from Tembisa has given birth to a village breaking a world record with 10 kids at once last night. She delivered 7 boys and 3 girls. A true meaning of aiyate Sione. pic.twitter.com/pK2Bj15ZTm