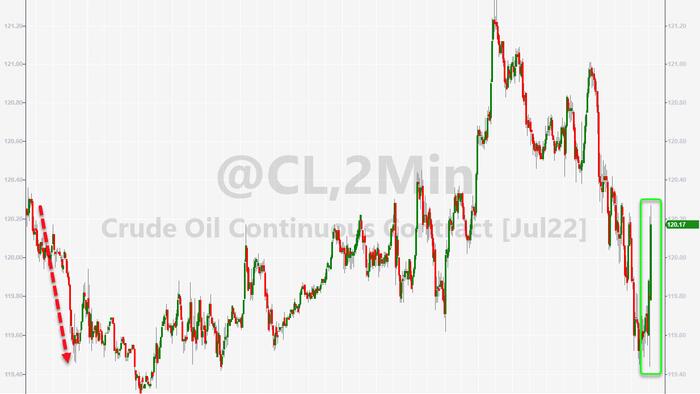 Oil prices are higher this morning but trending lower ahead of the official DOE data, erasing any gains following last night’s API report that showed notable builds for crude and gasoline inventories. The overnight jump was triggered by UAE warnings that oil prices are “nowhere near” their peak as an impending rebound in Chinese demand threatens to strain a global market already pinched by tight supplies.

“With the pace of consumption we have, we are nowhere near the peak because China is not back yet,” UAE Energy Minister Suhail Al-Mazrouei said at a conference on Wednesday in Jordan.

“China will come with more consumption.”

The comments came after banks including Goldman Sachs and Morgan Stanley underlined calls for higher prices in the coming months.

For now, all eyes are on inventories and any signs of demand destruction.

The headline build in crude stockpiles was more than offset by the withdrawal of nearly 7.3 million barrels of crude from the Strategic Petroleum Reserve last week. Total nationwide crude inventories (including commercial stockpiles and oil held in the SPR) fell by more than 5.2 million barrels in the week to June 3.

The four-week rolling average of implied gasoline demand rose, catching up to the five-year average for this time of year as Memorial Day travel accounts for higher consumption.

US production was flat last week and remains below 12 million barrels a day (mb/d), 12.7 b/d of total flows including releases from the Strategic Petroleum Reserve. But that’s still 3.2% below pre-virus highs.

WTI was trading just below $119.50 ahead of the API data and rallied after, despite the unexpected build…

Rebecca Babin, senior energy trader at CIBC Private Wealth Management warns, “I am concerned US demand will not live up to expectations and we will see demand destruction here.”

But for now, demand destruction in gasoline at the pump , for instance, remains modest at its worst.

Goldman says $160 crude – which implies near $6 gasoline at the pump – is when demand destruction will truly strike.