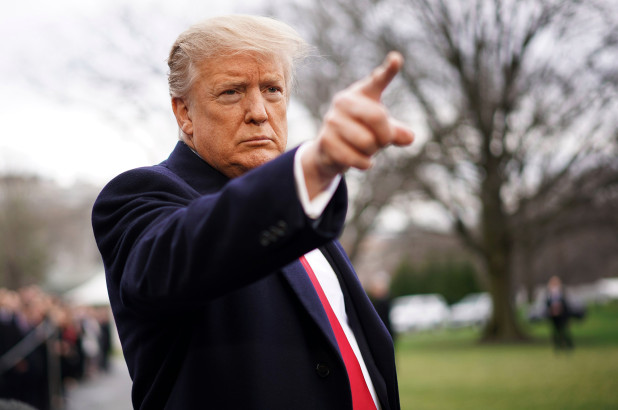 Former President Donald Trump called GOP politicians who choose not to reveal whether they’ve received a booster shot of a COVID-19 vaccine ‘gutless’ in an interview with One America News Network (OAN) on Tuesday.

“I watched a couple of politicians be interviewed and one of the questions was, ‘Did you get the booster?’ because they had the vaccine … They’re answering like, in other words, the answer is ‘yes,’ but they don’t want to say it, because they’re gutless,” Trump said on OAN’s “Real America with Dan Ball.”

“You got to say it, whether you had it or not, say it,” Trump said. “The fact is, I think the vaccine has saved tens of millions of people throughout the world. I have had absolutely no side effects.”

Trump previously revealed that he received his booster shot while speaking at one of his “History Tour” live events with Bill O’Reilly in December. The admission received some boos from the crowd, which Trump quickly shut down, saying that his administration “saved tens of millions worldwide” by creating the vaccine.

Trump also pushed back against suggestions the vaccine is not effective when speaking with Candace Owens in December, calling it “one of the greatest achievements of mankind.”

Republican Florida Gov. Ron DeSantis did not reveal whether he received the booster shot when asked in an interview with Fox News in December. “So I’ve done, whatever I did, the normal shot, and, you know, that at the end of the day is people’s individual decision about what they want to do,” he said.

Multiple outlets interpreted Trump’s words to be a jab at DeSantis, who is popular among conservatives in the lead-up to the 2024 presidential election, although neither has announced a plan to run.

“There are a lot of media narratives out there, but Governor DeSantis has always said COVID-19 vaccination (including boosters) is a private medical decision,” Christina Pushaw, spokesperson for DeSantis, told the DCNF in a statement.

Trump did not initially reveal whether he had been vaccinated against COVID-19 when he first received the shot, CNN reported. An adviser revealed in March 2021 that the former president had gotten the vaccine that January.