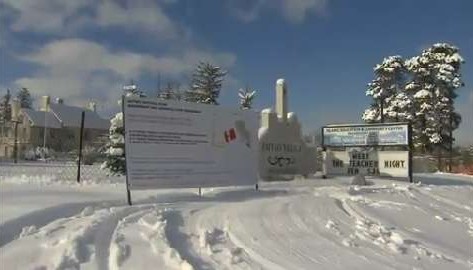 Residents of a Thornhill community are speaking out over a proposal to construct two Muslim low-income residential highrise buildings in a low-density neighborhood. The proposed condos would be built at the Jaffari Community Centre, at 9000 Bathurst Street next door to Ner Israel Yeshivah, in the Thornhill Woods Community, and would contain 377 units.

Is that statue giving the town the middle finger?

CityNews (h/t SusanK) Residents who live in the Thornhill Woods neighbourhood, located right beside the community centre, say they don’t want the area to become overcrowded. The Jaffari Centre has submitted a proposal to turn its 30-acre property into a high-density Muslim community which would include the highrise buildings as well as 61 townhouses.

Shabbir Jeraj, president of the Jaffari Centre, told CityNews this kind of expansion is going on everywhere in the area. Neighbourhood residents say they are also concerned because some of the proposed housing will be subsidized, which they believe may decrease their property value.

Residents opposed to the plan have started an online petition which had garnered over 2,500 signatures by Monday evening.

A meeting has been set up on Tuesday for community members to express their concerns over the development.

JDL TORONTO, ONTARIO — (Marketwire – Nov. 8, 2012) — Friends of Simon Wiesenthal Center for Holocaust Studies (FSWC) — the organization which lodged the complaint with police in May 2012, is pleased to learn the Islamic Shia Ithna Asheri Jamaat of Toronto (ISIJ) — tied to the Jaffari Center in Thornhill, Ontario, and the Toronto East End Madrassah have been put on notice by the York Region Police (YRP) that the antisemitic hate contained in their school curriculum is not acceptable, and reassured by a YRP report suggesting Canadians must examine our level of tolerance for allowing such offensive ideology, that is in conflict with our country’s core values, to be taught to our children.

Although criminal charges are not being laid in this instance, the YRP Report makes it clear that further promotion of antisemitic material, resulting in a cumulative effect of hate propaganda, may lead to a different outcome:

“The antisemitic hate contained in the curriculum of Toronto’s East End Madrassah was blatant; it is frightening to learn that this revolting content, including a topic on “The End of Jewish Plots and Treacheries,” is being taught to young children; their minds are being poisoned and I cannot imagine how these youngsters will one day become grown ups capable of functioning as tolerant and respectful adults in a multicultural society,” explained Avi Benlolo, President and CEO of FSWC. “Although criminal charges are not being laid in this case, I think it is incumbent upon the Toronto District School Board, and indeed all Boards of Education who lease their property to private schools, to investigate the content being taught on their premises to ensure an incident of this nature does not happen again.”

“What I don’t understand is where the odious comparison of Jews to Nazis fits into the history books of these organizations,” says Mr. Benlolo. “If they are truly relying on ancient texts, what is the justification for referencing Nazism other than as a form of Holocaust revisionism?”