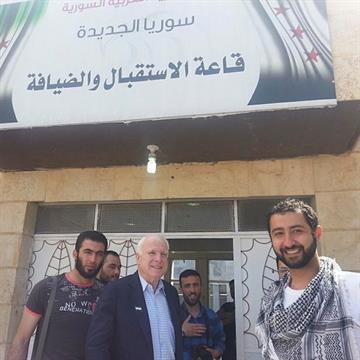 John McCain continues to ignore the presence of al Qaeda, ISIS and the Muslim Brotherhood among the opposition in Syria, and instead lashes out against anyone who speaks of this monstrous reality.

Christians are being slaughtered by McCain’s Syrian buddies, and he has a hissy fit against Christian Syrian leaders. A tantrum.

Who can forget the picture of McCain in his secret visit to Syria, showing him with jihad kidnappers? It would be funny if the bodies weren’t piled so high.

Senator McCain went to Syria to meet with the opposition. The Free Syrian Army and Al Nusrah, the two main armed factions of the Syrian resistance, are jihadist groups run by the Muslim Brotherhood and al Qaeda (here).

“McCain Knows Less About the Syrian Civil War than You Do,” Daniel Greenfield

One would think that would have given the ornery old fool great pause, but that would have been the reaction of a rational man. Despite his jihad photo op, McCain dug in ever more deeply when he hired an al Qaeda advisor (who had been previously fired for lying about her background.

Now he is beating up Syrian Christian leaders.

The delegation of Syrian clergy came to Washington to raise awareness among lawmakers of the growing crisis among the region’s minority Christian community. Christians make up about 10% of the Syrian population and they are being targeted and ruthlessly murdered by radical elements of the rebel forces, according to the visiting church officials. They say the media and human rights groups in the west have been largely silent on the ordeal of the Christians in Syria.

A number of churches have been destroyed or burned, children were killed when rebels fired mortar rockets at an Armenian Christian school in Damascus and countless others have been abducted by Islamic fighters, the Syrian delegation reveals in a statement published by the research group, Westminster Institute, that brought them to Washington. Eleven nuns have also been abducted and are still in captivity and two bishops are still missing after getting kidnapped during a humanitarian mission.

But Senator McCain, an Arizona Republican, evidently doesn’t want to hear negative stories about the rebels he’s working to arm. So he stormed out of a closed-door meeting with the Syrian clergy officials last week. Held in the Senate Arms Services Committee meeting room, the reunion also included senators Lindsey Graham of South Carolina, Sheldon Whitehouse of Rhode Island, Richard Blumenthal of Connecticut and Joe Manchin of West Virginia. Graham is a Republican and the rest are Democrats.

McCain marched into the committee room yelling, according to a high-level source that attended the meeting, and quickly stormed out. “He was incredibly rude,” the source told Judicial Watch “because he didn’t think the Syrian church leaders should even be allowed in the room.” Following the shameful tantrum McCain reentered the room and sat briefly but refused to make eye contact with the participants, instead ignoring them by looking down at what appeared to be random papers.

The outburst was so embarrassing that Senator Graham, also an advocate of U.S. military intervention in Syria, apologized for McCain’s disturbing outburst. “Graham actually apologized to the group for McCain’s behavior,” according to the source, who sat through the entire meeting. “It was truly unbelievable.”

Not really, for those familiar with McCain’s history on this matter. The veteran lawmaker is enamored with a controversial young “Syria expert,” Elizabeth O’Bagy, who has managed to convince him as well as the president and secretary of state that Syrian rebels are mostly moderate and not terrorists. While persuading the U.S. of this, O’Bagy concealed that she was a political director for the Syrian Emergency Task Force (SETF), a group that advocates for Syria’s rebels from Washington D.C.

Before getting exposed by conservative media outlets, O’Bagy claimed to be an objective analyst at a Washington D.C. think-tank that studies military affairs when in fact she had a “reputation as the leading expert on the armed opposition in the Syrian revolution,” according to SETF. In September O’Bagy was abruptly fired from the think-tank for padding her resume and McCain graciously hired her. “Elizabeth is a talented researcher, and I have been very impressed by her knowledge and analysis in multiple briefings over the last year,” McCain said in a statement to the political news publication that broke the story in late September.

Besides the fact that a Syrian Islamist group is essentially steering U.S. policy, a number of domestic and international media outlets have confirmed that terrorists—mainly Al Qaeda—are running opposition forces in Syria. For instance the New York Times published a piece that reveals Islamist rebels—including the most extreme groups in the notorious Al Nusra Front, an Al Qaeda-aligned force—are running the show in Syria. “The Islamist character of the opposition reflects the main constituency of the rebellion,” the story says. “Nowhere in rebel-controlled Syria is there a secular fighting force to speak of.”

Incredibly, last month an international news agency reported that Congress secretly approved U.S. weapons flow to what officials describe as “moderate” Syrian rebel factions. The White House refused to comment on the back-door operation, but the story cites U.S. and European officials who say the weapons deliveries have been funded by the U.S. Congress, in votes behind closed doors, through the end of government fiscal year 2014.